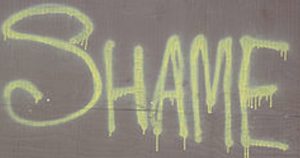 “What a shame. That’s unfortunate. Wow. I would never have believed….” Disappointment, that’s what happens when imperfect people, and we all are, fall short of the mark in leadership. Whether personally involved or not, when it becomes public, regardless of whether it’s in our little office circle, in the whole company, or in the press, we feel shame; the embarrassment of core values or standards not being upheld. We fear permanent implications of being associated with the errors and the resulting new brand that is being assigned; sometimes through no fault of our own. It can subsequently cause honorable people to behave dishonorably.

In some cases, the event itself gets sensationalized in the media or through gossip. It has a story arc and then eventually burns out, leaving scars and wounds behind long after the public has forgotten about the incident and who was involved. We don’t want to be associated with it or tainted by it, so we immediately distance ourselves. Some leave jobs. Others transfer departments. Still others become part of a reshaping of history.

What we don’t speak about are those who stay and were either part of the failure or discoverers of the breach. To our audiences, they often do not distinguish between who created the situation and who is in leadership during a discovery and working diligently to master the circumstances and minimize the impact. Salaciousness and sensationalism can create mob mentality responses. Therefore the innocent can be branded with the incidents.

Shame is a powerful motivator. It’s a deep knowing that actions were taken or omissions were made that were not in alignment with expectations. One of the most often seen subsequent behaviors is the re-imagining of what has actually occurred. Scapegoats are made. Stories are re-authored. Gossip carries facets of the truth that add new sins to the original failures in the attempt to protect.

It is the rare leader who stands before those who were impacted, wronged, or affected and says, “We made an error of judgment, or “We discovered long-term failures of leadership and choose to be transparent.” To do so requires great courage in the moment, to be willing to accept the tidal wave that comes towards you; attempting to answer all the questions that arise; many before you have had time to investigate the totality of the issue and provide a thorough answer that satisfies the inquisitors. It also takes a willingness to be affiliated with it, even though you may not have caused it, while you are actively engaged in trying to solve it. In addition, it may require the honest assessment and acknowledgement of the failures of those who have gone before you. In the honesty, it’s hard not to look like you’re blaming, when you’re fulfilling the request for transparency.

Everybody thinks they want to be the leader, the boss, to assume “power,” to be seen as “the one” to whom everyone turns. Everyone assumes that to be in that position is one in which you control the circumstances in which you lead and the outcomes that will occur as a result. Leaders who accept the mantle also take on everything that has occurred before, whether known or unknown. Learning how to prevent shame from being a driver when the tough times come is part of the art of leadership, with courage at the core, and a determination to stay aligned with core values and their subsequent behaviors. Leaders prevent shame from rewriting history and adding to the burden.